House of legislature for the US state of South Carolina 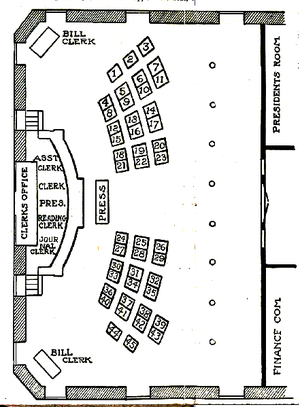 A diagram of the Senate Chamber, 1917

The annual session of the General Assembly convenes at the State Capitol Building in Columbia on the second Tuesday of January of each year. However, after convening, either the House or the Senate may call for itself a 30-day recess by a majority vote, or a longer recess by a two-thirds vote.[1]

Members of the South Carolina Senate

Composition of the Senate over time

OnAir membership is required. The lead Moderator for the discussions is Scott Joy. We encourage civil, honest, and safe discourse. See Terms of Service for curation guidelines.

This is an open discussion on the contents of this post.